Cooktop Options for Your Kitchen Remodel: Induction vs Electric 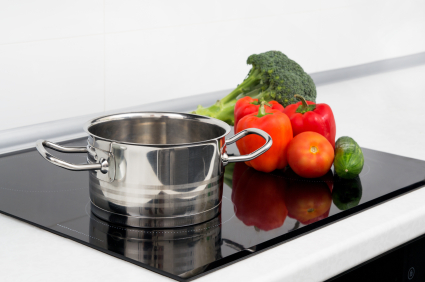 If you have never heard of an induction stove, you are not alone. It's a type of range that has been in development for over a century but has only recently taken off in certain parts of the world, induction cooking is certainly something to be reckoned with. When it comes to your kitchen remodel and your choices in cooktops, you may want to consider the differences between induction and electric stoves in order to make a decision that truly benefits your home.

Electric stoves are quite standard and require very little explanation. In production since the middle of the 19th century, electric stoves depend upon the conversion of electrical energy into heat in order to cook on a stovetop. In most of these stoves, a metal coil is heated to transfer heat into cookware.

If you want to deviate from the norm with an enormously beneficial technology, perhaps you should consider an induction stove for your kitchen remodel. These stoves also depend upon electricity to heat the bottom of a pot or pan, but with a few very specific differences. They differ in appearance from standard stoves because they are quite sleek and simple.

A technology that has been available for decades but has largely only taken off in Europe and Asia, the induction stove has yet to become popular in the United States. In fact, just about 2% to 5% of American homes are currently using induction stoves.

According to this New York Times article, induction cooking is much faster than standard cooking. This is because of the technology used in an induction stove. Instead of heating a pan with a gas flame or an electric heating element, the 90% energy efficient induction stove uses a magnetic field in order to generate heat. In fact, the surface of an induction stove does not even get hot, as shown by many different tests in which a newspaper or dollar bill is placed between the stove and the pan while water boils.

Because the surface of an induction stove does not heat up, this is a perfect choice for families with small children. For busy chefs, induction stove cleanup is a dream, because if food splatters onto the cooktop, it will not burn.

Unlike the standard electric or gas range, induction stoves only work with particular kinds of metals, such as cast iron or stainless steel. This means that, in addition to your kitchen remodel, you may be required to completely overhaul your cookware. This could pose an issue for some home cooks, however – if you have had your eye on that particular cast iron skillet or other piece of cookware, this could be the perfect opportunity.